Tokyo beef was born in iconic Burleigh Heads establishment “The Crab Pot “ in 2006. the name comes from a burger shop in Nobbys beach : The Tokyo Beef Burger.. “ Hey mate ! What’s on that ? Whale? And from there the name stuck.

Over the years Tokyo Beef have performed at everything from private parties, pubs and clubs, Skate Parks to Surf Festivals. Although there have been line up changes along the way. One thing has remained constant. Keep it up beat, happy and fun.

Our sound has been described as Old School Aussie Rock. We like to think of ourselves as a Surf/rock. Surf/ punk band. Drawing influences from ACDC. The Angels. Radio Birdman. The Celibate Rifles but to name a few. Tokyo Beef never fail to deliver a high energy set. The best way to get your serve of Beef is to catch them live.

Welcome to our first instalment of “Friday in Focus” where we dissect and discuss an album from a current Aussie pub rock band.

This week we’ve got “Kamikaze” by Tokyo Beef

First point up for discussion, what did everyone think of the album?

Personally I thought it was great. I love the surf/punk rock vibe and I think the comparisons that the boys have been given to Radio Birdman are well deserved

Nicole – Davey’s farm is a ripper!

You mention that there have been a few line-up changes but the sound of the songs seems to be pretty constant, so who does the majority of the writing?

Graham – Mate, this is an awesome album, check out their videos on YouTube, find em on fb, grab the first CD also, oh and check out this great review http://www.i94bar.com/…/kamikaze-tokyo-beef-self-released

Yeah I had a listen to a few of the songs from the earlier album and thought they were pretty cool too. Be interested to hear Graeme tell us a bit about the dynamics of the group now as opposed to having a few more bodies on stage…

I reckon there’s a story there…

Graeme – Chris to be honest we have never met. But he pretty much hits the nail on the head in that review

Haha…shame, I was hoping for a juicy tale of unpaid bar tabs and threats of broken thumbs or something…

Roger – Haha Rusty here. One set with the beef is like a two hour work out.

Graeme – Ok. Majority of the songs are written by myself and the lead guitarist. Peter Punk. Ideas are brought to the band. We pull the songs apart and put them back together with each player adding their own flavour.

Nicole brings up a good question…what’s everyone’s favourite song off the album?

It’s close but for mine I’d have to say CHAOS. Love the chunky drum beat and the extra surf style guitar especially the solo parts

Lindsey – Sorry, I find it hard to separate… Dave’s Farm, On The Streets and Sunsets

Graeme – I like Free. One take warts and all. The drums are great in this song. So we had an ep before this. Basically it’s the same line-up but with different drummers. Roger Haines is now the current drummer

The videos looks to have another singer, was that right?

Graeme – Tokyo Beef have been around for over 10 years. We have had various line-ups in that time. The best vids are Idiot Box, Livin it up and Chaos live at Chardons Corner

Yeah I saw those and thought they were great. The thing about listening to those and especially the videos was I was instantly taken back to the feelings I had the first time I heard Kings Of The Sun. Particularly the feeling of a coast inspired sound…I could imagine playing the music in the car while driving down the coast, windows down and the smell of the surf…

Graeme – Getting amped for a surf for sure.  Funny I get a lot of inspiration for lyrics whilst surfing Burleigh. There’s definitely something about Burleigh point that encourages music

Roger – Chris you hit the nail on the head. It’s great to listen to when going for a surf.

There must be something about surfing that keeps you young. You guys don’t seem to be slowing down to much…

Roger – We are having a ball. It’s funny when the young musos are blown away by our energy.

Graeme – We love it. Music keeps us young. Surfing is a bonus. It’s a fair workout playing in The Beef. Roger is good. He can keep up. We’ve had drummers in the past that wanted us to slow the songs down to suit them. They didn’t last long.

Lindsey – I love that the album sounds like it’s live & unadulterated, it helps carry the energy.

Yeah, I love albums that have that raw feel to them. I think I read that they’re all first or second takes…

Graeme – Chris all the music was recorded live. It took me a while to find a studio that would do that. Lovestreet Studios here on the Gold Coast said they could do it. We’ve used them twice now and will be using them in the future

Haha, I was wondering about the opening of “Where’s The Party?” Looks like a cool space. Talking about favourite songs, which one do you find the most fun to play live?

Roger – Chaos. I get to use the whole kit.

Graeme – That’s a hard one. Sunsets because it’s a love song

Graeme – Listen to it. It has meaning. And a rockin beat. And it’s fun to play. Where’s Jonny Fairlaine 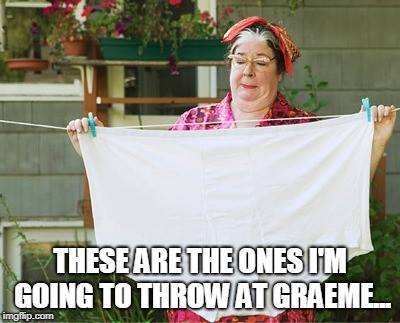 Graeme – I think there should be some sort of size limit

Graeme – That’s right. I dodged a pair of these a few years ago. They took our drummer out.

Alrighty rock fans, I’m about all beefed out from all this love song talk…

I think this is a great album and if you haven’t already got a copy do yourself a favour and head on over to their bandcamp page and grab one.

Graeme – Hey Chris. Thanks for your time. Had a laugh. It’s been good. You can check us out on Bandcamp. Itunes. Spotify. Or head over to our Facebook page and buy an old school CD.

TheDeanov DarkCloud – Friday Focus! Great idea CM, look forward to many more. As I grew up listening to Birdman, early Oil’s and the Rifles how could one not enjoy this record. Well done lads and look forward to seeing you live one day

Graeme – Hopefully we will share a stage together soon.